Not a chance of that happening at Thursday night’s opener of “Opera Theatre of the Rockies’” new production of this immortal work in the Shockley-Zalabak Theater at the new Ent Center for the Arts on UCCS campus. (Two more performances are scheduled for Saturday night at 7 pm and Sunday afternoon at 3 pm). Set on a traditional concert stage, with no pit in which to put an orchestra, with the chorus of priests, priestesses, ministers, citizens, or slaves dressed in black on rear risers, this performance was going to succeed or fail largely on the merits of its music making.

Thanks to the superior ingredients assembled by Opera Theatre’s mastermind Martile Rowland, this Aïda was a soulful and stimulating experience, providing an intimate forum with which to showcase solo voices and orchestra.

It took time for the performance to hit pay dirt. But at three hours in length, this opera has plenty of that. The violins of the “Bee Vradenburg Opera Theatre of the Rockies Orchestra” were stressed by the plaintive opening passages of the opera. But the firm hand of conductor James Albritten brought out a tight, passionate, and dramatic performance from the ensemble– essentially a scaled-down edition of the Colorado Springs Philharmonic.

The artistic and general director of North Carolina’s “Piedmont Opera” and a frequent collaborator with Opera Theatre, Albritten is a true man of the theatre. Bringing an inspired vision to the music, he made sure that his principals and chorus had everything needed to produce bravura performances. Unfortunately, the far-in-the-back placement of the Colorado Springs Chorale kept them from producing the sonic glory for which Aïda is renowned. The quieter and atmospheric off stage choral episodes, no doubt led by their director Deborah Jenkins Teske, fared much better in this sonic environment.

But this production was rigged to spotlight its principals. They were almost always positioned in front of the orchestra, in the lap of the audience– decked out in the prescribed costume and make-up one would expect to encounter at any fully-staged production of Verdi’s masterpiece.

If ever there were star-crossed lovers, Ethiopian princess and now slave girl and Aïda, and Egyptian war hero and Pharaoh-favorite Radamès would be them. Soprano Marsha Thompson and tenor Ta’u Pupu’a gave almost parallel performances. Thompson’s lower range lacked the bite to match the passion of her character but soared to sonic glory as the evening wore on. Pupu’a, an ex-NFL defensive lineman, displayed a solid tenor but needed time to connect it with the drama of the moment. Neither could be said to be great actors, but there was no denying the powerful and beautiful impact of their final death duet.

For all its glitz, Aïda is essentially a story of a love triangle. As Amneris, the daughter of Pharaoh, mezzo soprano Katherine Goeldner rendered a superb performance. Her singing was flawless, distinguished by beauty and drama and connected seamlessly to the complex machinations of her character. Aïda’s father, the captured King of Ethiopia was a triumph for baritone Brian Major. He possesses a honey-filled voice capable of organic, dramatic expression.

Opera Theatre brought back two of its longtime favorites to realize the roles of the Egyptian leaders. Bass Ashraf Sewailam scored as high priest Ramfis. Theatrically he transcended the limitations of this semi-staged concept and produced powerful and poignant vocal expression. Native son Erik Kroncke brought his always-focused bass voice and theatrical accuracy to the role of King Pharaoh.

Fine work was also proffered by tenor Humberto Borboa as The Messenger and soprano Carolyn Hoehle as the High Priestess.

As I sat waiting for the opera to begin, the biggest question at hand was how the immortal “Triumphant Scene” would fare in a setting bereft of ballets and parades. And yet, it was but one of the many problems stage director Steven LaCosse would have to contend with. His only visually-dynamic tool were the back scrim projections of ancient Egypt chosen by designer Norman Coates. His solution was oddly compelling.

As principals froze in character and costume in front, the orchestra was whipped into a frenzy by Albritten. Had not Verdi’s music been so engaging, this would have been a disaster. After all, this is an age where opera lovers are more likely to know Aïda through recording than live performance. While Opera Theatre’s production does not qualify as a bucket-list experience of Aïda, it offers more than enough sonic and dramatic quality to necessitate a visit to the UCCS mesa.

Opera Theatre of the Rockies is 20-years-old. Here’s wishing them a Happy Birthday, many more, and the resources to elevate future productions to the gold standard of the operatic experience. 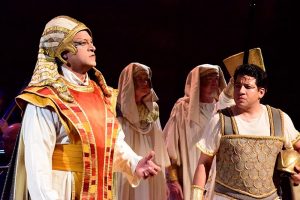 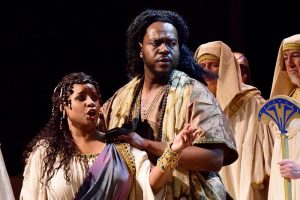 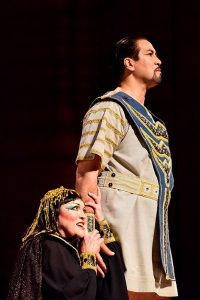 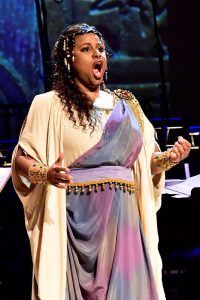 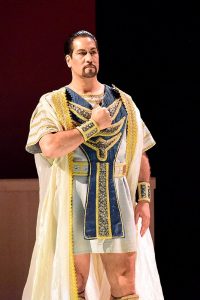 Additional information about the performance.